Fantasy Football: A League of Their Own, Part Two

Our Fantasy Football guru is back — just in time to kick off the NFL regular season! See how this lady’s team matches up against the other teams in A League of Their Own below.

It’s finally here! The NFL regular football season officially kicked off Wednesday night with the New York Giants vs. the Dallas Cowboys. Okay, so obviously those aren’t my favorite teams, but who cares? I’ve already made it pretty clear how much I love obsess over football. Throw in the new element of fantasy, and we have another whole story! I really don’t know what I’m excited about more… My beloved Baltimore Ravens kicking off their season on Monday Night Football… Or playing in my first season of Fantasy!

Last month, I walked you through what the Fantasy Football craze is all about and told you about my all girl’s league called A League of Their Own (check out Part One of my series here).  We drafted our players in the beginning of August, before preseason games even started. If you know anything about Fantasy, then you know that that was extremely early and very risky. Unfortunately, I learned that the hard way. My star running back Ryan Mathews was injured in the very first preseason game!

I guess you could call our premature draft a rookie mistake. But, that doesn’t mean we’re out of the league. Fantasy Football is on the rise for women and I, for one, am ready to prove to that it’s not just a man’s world.

However, I’ll admit that I was sort of clueless about what players to pick up during the draft. That’s what made it so exhilarating! Though none of us in the league knew precisely what we were doing (some even went so far as to draft players by their looks), we all had high hopes! It turns out the team I drafted wasn’t half bad either. Phew! 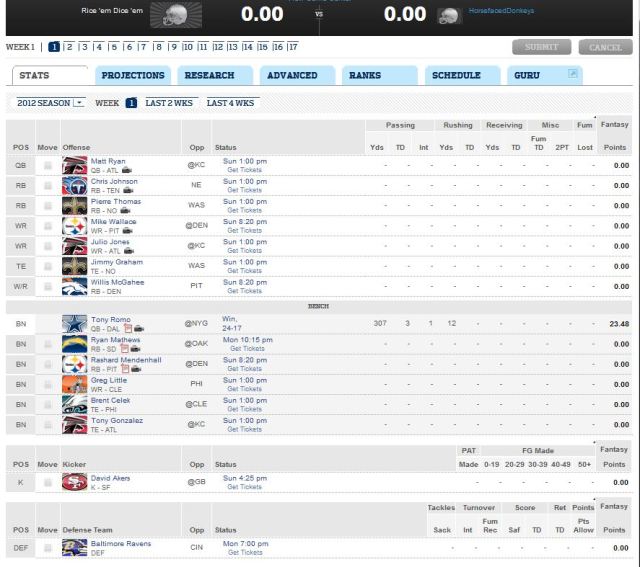 Since the draft, I wouldn’t say that I’m an expert by any means. But thanks to a bit of research and a bit more bugging of my boyfriend and brother, I’ve gotten the hang of it. (Sorry guys!) In fact, I can’t get enough of it and find myself on my Fantasy site just as much as my other social media outlets. I’m officially hooked.

So as the official NFL season kicked off, my team Rice ‘em Dice ‘em faces HorseFacedDonkeys this week. Since the site predicted that my roster of players would lose the game (and I couldn’t fathom losing in week one!), I searched endlessly to figure out the best starters from my team. After seeking advice from my same male, Fantasy support system, I decided to bench Tony Romo at quarterback and give Matt Ryan the starting position for week one. Both are quality QBs, but I was unsure about Romo’s performance against the defending Super Bowl Champion Giants.

Boy, am I kicking myself now! If you didn’t watch Wednesday night, Romo had an incredible game that lead to him earning 23.48 Fantasy points (and the Cowboys 24–17 win over the Giants).  But, that’s the risk you take in Fantasy. No matter how much research or expertise you seek, your team is out of your hands when the first whistle blows.

You better believe that I’ll be camped out in front of the TV with my laptop and phone in hand this Sunday! I’ll surely be flipping back and forth between all of the games and checking statistics all day and all night. I’m sure my fellow league ladies and I will be smack-talking via Twitter as well — all in good fun, of course!

Fingers crossed for Ryan to prove that I made the right decision by starting him over Romo. His Atlanta Falcons take on the Kansas City Chiefs Sunday at 1 p.m. I have a lot of faith that the rest of my starters will put up some decent points on Sunday, too.

So, my fellow twenty-something’s: are you ready for some (Fantasy) football?!